Catnip For Dogs (Anise Seed) – Is It Safe?

As you know, catnip alters a cat’s behavior. They become dramatic and act like they are ‘high’. But have you ever wondered if there is a catnip alternative for dogs?

Catnip For Dogs (Anise Seed) – Is It Safe? Aniseed is catnip for dogs with a licorice-like taste that dogs find exciting. When given in moderation, about a few seeds for each pound of dog food, anise is safe for dogs. However, overindulging on the herb can irritate your dog’s stomach as well as make them dull and sluggish.

Nevertheless, before giving your pup anise, you need to know its full effects on their health. In this post, we shall look at the benefits and side effects of anise on dogs. Also, read on to find out where to buy anise for dogs plus a DIY recipe. To begin with, let’s find out all about an equivalent to catnip for dogs.

Is There An Equivalent To Catnip For Dogs?

Anise is the catnip version for dogs and is different from catnip.

Also called aniseed, anise is an annual plant native to the Middle East and Egypt. This herbaceous plant has been cultivated for over four millennia for its medicinal properties.

It was mainly favored for its carminative effect which is a fancy word for gas relief or combating flatulence.

Anise is known for its sweet and aromatic licorice-like flavor, which dogs go crazy over. That said, is there such a thing as dognip? To start with, unlike catnip whose effects on cats passes after about two hours, doggies are so much attracted to anise that they will follow its scent for hours on end. As such, the herb’s extract is used to douse the artificial hares used in foxhound races.

Aniseed is a little herbaceous plant with lacy leaves and white or yellow flowers. It grows to about 3 ft tall with the leaves on the lower part of the stem being shallowly lobed and around 2 inches long.

Leaves on the upper part of the stem are feathery and divided into several smaller leaflets. Its fruit, known as aniseed, is small, dry, and grows up to ¼ inches long.

Anise is, however, not to be confused with star anise.

While both have a licorice flavor, star anise is different from anise in several ways. For example, star anise is a tree that grows to about 65 ft with a less potent flavor than aniseed. Most importantly, as far as equivalents for catnip for dogs go, anise is vastly more effective than anise.

What Effect Does Anise Have On Dogs?

Before you expose your dog to any substance that alters their behavior, you need to understand the full effects first. To guide you through this, let’s answer some important questions on the effects of anise and catnip dogs.

Does Anise Get Dogs High?

Dogs can be given aniseed in its various forms including raw and powder.

In most cases, after they ingest the herb, your dog will appear hyper and exhibit similar behavior to a person high on drugs.

Typically, after a dog ingests aniseed, it takes about 30 minutes for the energizing effect to manifest. However, anise does not affect all dogs in a similar manner.

While for most fidos the herb is a pick-me-up pill, for others, anise makes them mellow with reduced activity for a few hours.

What Effect Does Catnip Have on Dogs?

For starters, catnip is perfectly safe for dogs. The plant is non-toxic to both cats and dogs. The only difference is that while this green leaf makes cats hyper, it doesn’t make dogs go crazy.

What happens when you give dogs catnip is that they become mildly sedated. This makes catnip good for dogs with anxiety.

Apart from keeping your fido relaxed, catnip helps dogs sleep. As such, you can use catnip to help your furry friend adjust to a new sleeping schedule and alleviate sleep-related conditions.

Also, catnip helps to relieve stomach aches as well as car sickness. Also, the topical use of catnip is effective in repelling insects and treating wounds.

What Are The Benefits Of Anise Seed On Dogs?

As we have noted, anise makes your furry bundle hyper and gets them moving. This herb does, however, come with other health benefits for dogs of all ages. Here is a brief look at some of the benefits.

Dogs are quite hardy and, typically, they rarely get digestive issues. However, there are some factors that can lead to gastrointestinal disorders. Such include a sudden change in diet, trauma, medications, and ectoparasites.

Giving your furry friend a little anise powder or anise oil daily for a week does alleviate digestive issues. The treatment helps to reduce bloating, stomach aches, and irritable bowels.

Respiratory issues in dogs can be caused by injury, pneumonia, lung infection, and inhalation of smoke. Some of the symptoms to look out for include fever, nasal discharge, coughing, and difficulty breathing.

The good thing is that just like in humans, respiratory problems in dogs can be treated using minty herbs. Anise is a perfect solution as it contains antibacterial and antiviral factors that help the immune system eliminate infections. It also constitutes thymol, anethole, and terpineol; compounds that are known to ease chest congestion.

If a dog comes into contact with poison, they may end up having seizures. The disorder can also be brought about by other illnesses such as liver disease, stroke, head trauma, brain cancer, and kidney disease.

Symptoms include confusion, disorientation, fear, and temporary blindness. Anise extract has both neuroprotective and anticonvulsant factors that are effective in treating seizures.

Is Anise Toxic To Dogs?

While anise is beneficial to your dog’s health, too much of it can be toxic. Typically, anise for dogs comes in the form of treats. You will also find aniseed powder as a small constituent of dog treats. And when in its pure form, the powder or extract is given in very small dosages.

As a rule of thumb, only add about 3-5 dry anise seeds to a pound of dog food. You can also grind the seeds and sprinkle a small amount on treats or toys.

When it comes to catnip, mix ¼ to ½ spoonful of dried powder for every pound of food. Also, adding a few leaves of catnip on their drinking water or allowing a few licks of catnip tea will keep your fido sedated for a while.

Dogs are, however, primarily canines, meaning that flesh is their main diet. As such, giving them too many herbal treats can be bad for their health.

So, is anise toxic to dogs?

If taken in high amounts, anise can rile up your dog’s stomach. Eating large amounts of anise for a long time also causes dogs to suffer from a depressed central nervous system (CNS). The disorder is characterized by lack of coordination, dizziness, and lethargy.

Similarly, dogs can overdose on catnip. Though it’s not possible for your four-legged friend to die from eating catnip, an overdose is possible. Nipping too much on the herb can cause digestive issues, vomiting, breathing issues, and vomiting. As such, it helps to seek a vet’s advice on the right amount of catnip to give your dog, depending on age and weight.

Where To Get Anise For Dogs?

Are you big on DIYs and probably have a kitchen garden with herbs? If so, it’s time you considered planting anise for your fido. In the meantime, here is where to buy anise products for dogs.

Anise Biscotti is a USA-made treat for dogs of all ages. It comes with no additives, preservatives, food colors, salts, or sugar. Eggs, peanuts, honey, and flax make up some of the treat’s major ingredients. To add to the flavor, anise seeds are included in the formulation. Another ingredient of note is hemp seed which aids in skin, heart, and coat health. 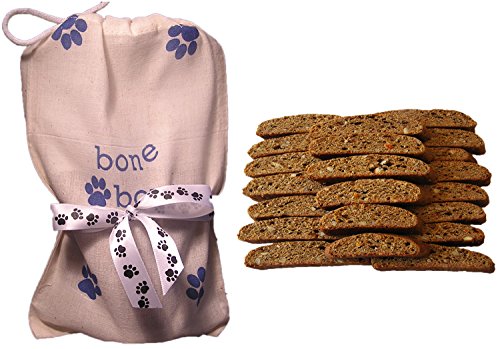 These are non-GMO organic anise seeds used as dog food toppers. Add a few anise seeds to foods such as soups, and sausages to make them enticing. You can also use the seeds to encourage feeding when switching your furry companion’s diet. 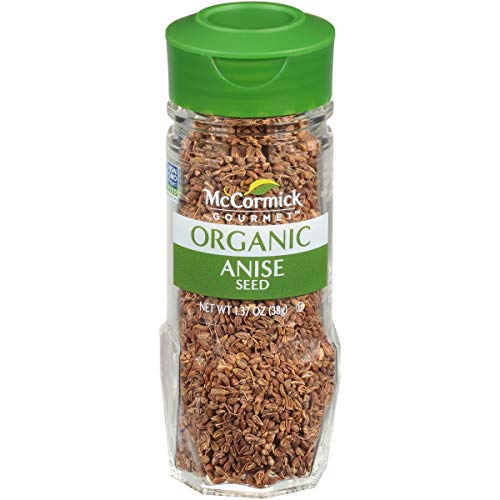 Use a few anise oil drops to replace whole or ground seeds. However, OliveNation Anise Oil is 100% pure and as such, you may need to dilute it before giving it to your dog. To dilute, mix 3-5 drops of anise oil with one teaspoon of carrier oil such as coconut and olive oil. 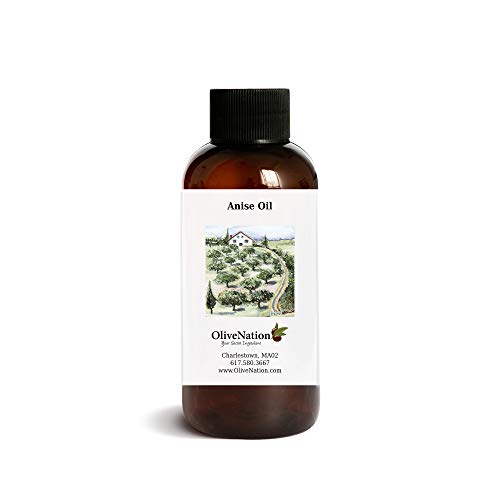 Pure Anise Oil by OliveNation - Use for Delicious Hard Candy, Chocolates and More - Size of 4 oz
Check Price on Amazon

If you would rather go for a DIY anise treat, here is a recipe to try:

What Dishes Are Anise Used In? Anise is used to flavor a wide range of foods and drinks. It’s used in the preparation of pizzelle (Italian waffles), spice cookies, humbugs, biscuits, and bread. Ground anise is also added to soups, marinades, soy sauce, and spices. When it comes to beverages, anise is used in marmalades, liquor, and herbal tea.

Is Anise And Fennel The Same? While both Anise and Fennel have a licorice-like flavor and their seeds look similar, they are different. For starters, only seeds are edible in anise plants while most of the fennel plants can be eaten including seeds, bulbs, and leaves. Simply put, anise is a spice while fennel is more of a vegetable.

How Long Does Catnip Last On Dogs? Like most herbs, catnip takes around 30 minutes to take effect on dogs. Thereafter, the calmness brought about by catnip lasts for about 5 to 15 minutes. As such, administer it at least half-hour before exposing your dog to a stressful event such as a visit to the vet.

Lack Of Veterinarians Being Felt In California’s Bay Area

California’s Bay Area is experiencing a shortage of veterinarians and nurses, causing some hospitals to decrease intake admissions for emergency services.

Sheltie – Your Complete Breed Guide To The Miniature Collie

Also known as Shelties or Shetland Sheepdogs, the Miniature Collies originate from Scotland’s Shetland Islands. These dogs tend to be wary of strangers and have barking tendencies. However, they do make up for these tendencies with their petite sizes, high energy level and fun-loving personality.

TheGoodyPet.com is a participant in the Amazon Services LLC Associates Program, an affiliate advertising program designed to provide a means for sites to earn advertising fees by advertising and linking to Amazon(.com, .co.uk, .ca etc)