When it comes to German Shepherd dogs, one question that is prevalent among owners of this wonderful pooch is when their dog will stop growing and be considered an adult.

Three years may seem like a lengthy period for a German Shepherd dog (GSD) to be fully considered an adult, but this is what is obtainable with most large dog breeds. To ensure your German Shepherd grows to become the best possible version of itself, appropriate feeding is essential during this developmental phase.

And we’ve included tips on how to properly feed your GSD puppy, along with what is considered healthy weight for this dog at different stages of its life. Before we go into all this though, let’s take a look at the phases of a German Shepherd dog’s growth.

At What Age Is A German Shepherd Fully Grown?

Like most large dog breeds, German Shepherds are not regarded as fully mature until they are about 2 to 2.5 years old, with some even taking up to 3 years to mature! And no matter how big they grow in that period, German Shepherd dogs are typically considered to be puppies till they attain full maturity.

The stages of development and maturity in a German Shepherd dog, from the point of birth right up to when the pooch is a full-grown adult, can be classified as follows:

The neonatal stage marks the period preceding a German Shepherd puppy’s birth, and it typically lasts for two weeks.

GSD puppies are usually born blind and they are totally helpless during the neonatal stage. During this stage, the puppies spend most of their time eating and sleeping.

The Transitional Stage (2 To 4 weeks)

At this stage, the German Shepherd puppies have opened their eyes, and are aware of happenings in their surroundings. It is also around this time that the puppies will begin to walk, although their movements may still be a bit wobbly.

The Socialization Stage (3 Weeks To 6 Months)

The socialization stage of a GSD puppy’s life typically begins when the pooch can walk on its own without assistance, and it usually spans for more than five months.

During this stage, it is important to introduce GSD puppies to new people, animals, and environments, as this will play a major impact in shaping the dogs’ future behavior.

You can begin feeding soft dog food to the puppy during this period, and it is recommended that you housebreak the pooch when it is 8 weeks old.

The Juvenile Period (3 To 6 Months)

The juvenile period precedes the socialization period of a GSD puppy, and it is at this stage that the dogs begin to develop the urge to investigate their surroundings more.

It is also recommended that you begin training your GSD puppy during this juvenile stage. And by incorporating positive reinforcement and keeping training sessions short, you will get the best out of your pooch.

It is also worth noting that the teething process in German Shepherd puppies typically happens during the juvenile period. Also, by the end of this period, GSD puppies will have attained, at least, 70% of their expected adult height and weight.

The Adolescent Stage (6 Months To 2 Years)

The adolescent stage is undoubtedly the longest period of a German Shepherd’s road to full maturity. And this is typically the time when GSD puppies attain sexual maturity, with females going into heat and the males starting to display sexual behavior.

The German Shepherd also attains the peak of its physical development during the adolescent stage, but there are aspects of the dog’s mental capacity that still remain to be worked on.

The maturity stage sets in when a German Shepherd is considered to be fully developed and has attained its peak physical and mental capacity.

Mature German Shepherds are fully grown in size and weight. And provided the GSD was properly socialized as a puppy, then you have a pooch that’ll make an excellent companion, and with which you can create lots of beautiful memories.

How Much Should A Young German Shepherd Puppy Eat?

How many cups of food you should feed a young German Shepherd puppy is dependent on factors such as the dog’s weight, growth rate, age, and recommendations from your vet.

However, the generally accepted guidelines for feeding young German Shepherd puppies are:

How Many Times A Day Should You Feed Your Young German Shepherd Puppy?

The recommended frequency of feeding for a German Shepherd puppy is as follows:

You can also feed your German Shepherd puppy snacks and treats in between meals, but the frequency with which you do this should reduce as the pooch grows older.

What Should You Feed A Young German Shepherd Puppy?

As earlier seen, German Shepherd dogs have several stages of development, and it is essential that you feed your dog the appropriate meals at each stage to provide the levels of nutrition that are required for healthy development.

That said, young German Shepherd dogs typically need to eat more than adult pooches. And the young GSD’s meal should also contain a higher percentage of fat and protein compared to that of the adult dog.

From Birth To 8 Weeks Old

The period immediately after a German Shepherd’s birth is very crucial, and the puppy must be appropriately fed to ensure proper growth and development.

Puppies should be left with their mothers, for at least eight weeks after birth, so that they can be fed the nutrient-rich colostrum which contains antibodies necessary to fight diseases and infections.

If, for one reason or the other, the puppy has to be prematurely weaned, then the best thing to do is consult a vet for the prescription of specific infant formula for the pup.

Once the puppies are weaned – typically around eight weeks – they should be placed on a special puppy mush diet, which is usually prepared by soaking regular dog kibble in goat milk.

Adding goat milk makes the food easily digestible for the puppy, and by soaking the kibble, you’re making it easy for the young pooch to eat. For GSD puppies that don’t have teeth, you can add water to the mixture to make it even easier for the pooch to lap up.

As the German Shepherd puppy grows older, you can decrease the amount of goat milk you add to its kibble, till you begin to feed the puppy dry, hard kibble. You can also add tiny amounts of fresh ingredients such as boiled eggs, unsweetened yogurt, and canned pumpkin to improve taste and flavor.

This phase is highly important and it marks the transition of the young German Shepherd from puppy to adult food. You can continue to feed the pup kibble, but you need to ensure the food is of the highest possible quality.

And if you will rather switch to wet dog food, then we suggest you pick one that is specially formulated for young German Shepherd dogs such as the Pet Plate.

German Shepherd puppies require a protein-rich diet to grow into the strong and athletic dogs they are designed to be, and the Pet Plate’s meat-based formulation caters adequately to this. Additionally, you have the option to submit your GSD puppy’s physical characteristics to Pet Plate to get a tailored food plan for the pooch.

Can You Overfeed A German Shepherd Puppy?

German Shepherd puppies, like all other dogs, are prone to weight issues; Hence, to prevent this from happening, you should avoid overfeeding a Shepherd puppy.

Sure, by overfeeding a German Shepherd puppy, you will be encouraging significant weight gain and rapid growth. But this weight gain is highly unhealthy, and you’re only placing the pup at risk of suffering from health conditions such as hip dysplasia in the future.

How Much Weight Should A German Shepherd Puppy Gain?

As earlier stated, a German Shepherd puppy doesn’t attain maturity until it’s about 2 to 2.5 years old. And as the puppy grows, you can expect to observe changes in its weight and body structure.

That said, there’s a noticeable weight difference between male and female GSD puppies, with the male pooches tending to weigh more than their female counterparts as they both age and when they attain full maturity.

The charts provided below provide an idea of how much both male and female German Shepherd dog puppies should weigh at different stages of their growth:

As observed from the figures provided above, the majority of the German Shepherd’s growth occurs when the dog is still a puppy, with the pooch’s growth beginning to slow down as it matures.

NOTE: The figures provided in the tables above are rough estimates, and it is quite possible for a GSD to either weigh more than or below the provided weight ranges.

How Can You Tell How Big A German Shepherd Will Get?

Factors determining the size of German Shepherd dogs include:

One way of telling how big a German Shepherd puppy will get is by taking a look at the size of its parents. And this is, most times, accurate, considering the fact that the German Shepherd dog is purebred.

If the puppy’s parents are on the large side, then you can expect the pup to grow to become a relatively large dog. And in the same vein, if the parent German Shepherds are medium-sized, they will most likely produce medium-sized puppies.

Knowledge of your German Shepherd’s gender can help you make a calculated guess on how big the pooch will grow to be.

That said, the average size for a male adult German Shepherd is between 65 to 90 lbs, while the female GSDs typically weigh between 50 to 70 lbs as adults.

When it comes to height, adult male German Shepherd dogs typically stand between 24 to 26 inches tall, while the females average between 22 to 24 inches in height.

The effects may not be as pronounced as those of the factors listed above, but what your GSD is fed while growing also plays a role in how big such a pooch will get.

German Shepherd dogs that are fed a high-quality diet that contains all the nutrients required for healthy dog growth are more likely to attain the weight standards expected of a GSD, compared to those that are fed nutritionally lacking meals.

What Should I Look For When Buying A German Shepherd Puppy? Important qualities you need to be on the lookout for when buying a German Shepherd puppy include the pooch’s temperament and the appearance of the puppy’s parents. Temperament will influence the level of socialization and interaction you can have with the puppy while the parents’ appearances can help with understanding the puppy’s inherent health conditions. It is also helpful to do some research on the breeder’s background so that you don’t end up purchasing a puppy that will cost you a small fortune in vet bills.

How Long Should German Shepherds Eat Puppy Food? German Shepherd dogs will typically need to eat puppy foods till they are about 12 months old. However, there is no defined standard for how long you’ll need to feed a young German Shepherd puppy food. And the period usually varies according to pup’s growth rate, size, and health requirements. 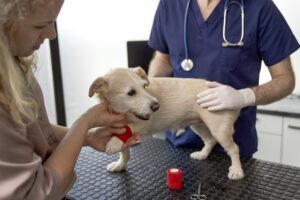