What Colors And Patterns Does A Rottweiler Come In?

When it comes to Rottweiler aesthetics, most people are only familiar with the glossy black short coated and brown eyed Rotties. However, there are many rare and beautiful types including the White, Black, and even Blue Rottweilers. Let us take a look at some other awesome varieties in terms of length, colors, and patterns.

Out of all, the Weimarrott and the New Rottland are the best Rottweiler mixes that you can’t afford to miss out. Following these, the Dachsweiler and the Rotticorso are two very promising designer dog breeds.

How Much Does A Rottweiler Cost?

Rottweilers cost around $700 to $3,000. They are big, energetic dog breeds that many people like. Rottweilers don't need a lot of grooming, but they do need a lot of food because they are big and energetic. You should expect to spend around $120 per month on your Rottweiler, mostly on food. Rottweilers can be aggressive if they are not trained properly, so you should budget for some training expenses too.

When it comes to price point, female Rotties are more expensive than males. A female pup should set you back a couple thousand dollars. If a smaller and more affectionate pooch is what you want, a female Rottie is a good choice. Otherwise, there’s the playful and more muscular male Rottweiler that should better fit your requirements.

In terms of bite force, the Rottweiler rules with an average PSI of 328 per bite compared to the 200 PSI from a Doberman. But Dobies can run faster at 40 mph and chase the bad guys quickly while Rotties are a little behind at 25 mph. Yet, in the popularity category, Rotties have consistently outranked the Dobie over the years.

The biggest tell-tale sign that you’re looking at a German Rottie and not an American is the tail. Rottweilers that originated in Germany don’t have docked tails unlike their American counterparts. German Rottweilers also have a larger, broader head, and these canines cost slightly more than Rotties born in the USA.

Boxer Rottweiler Mix – Your Complete Breed Guide To The Boxweiler

One of these mixed dog breeds is the muscular and bulky-looking Boxer Rottweiler Mix or as commonly called Boxweiler, Rotty, Boxie Rottie, and Boxer Rottie. It is produced by mixing a Boxer and a Rottweiler. However, don’t be fooled by a Boxweiler’s physical appearance because behind that ‘macho’ physique is a playful and affectionate canine companion. 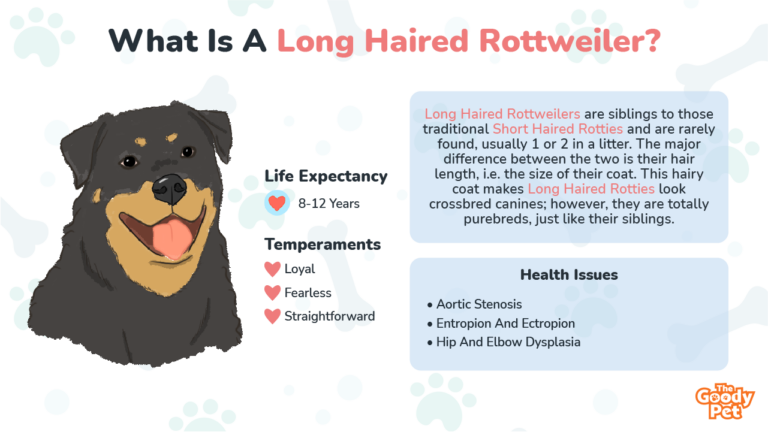 Long Haired Rottweilers are siblings to those traditional short haired Rotties and are rarely found, usually 1 or 2 in a litter. The major difference between the two is their hair length, i.e. the size of their coat. This hairy coat makes Long Haired Rotties look like crossbred canines; however, they are totally purebreds, just like their siblings.