With their long, silky hairs, long legs, and thin bone structures, one would not be mistaken to call the Afghan Hound the supermodel of the doggo world. Seeing them paraded in many conformation shows is akin to watching Naomi Campbell or Linda Evangelista strut the runway.

The thick and fine-textured hair of the Afghan Hound is its trademark which can be styled in a variety of ways similar to human hair. The head has a long topknot while the foreface has short hairs that further accentuate their elegant faces, with some exhibiting a beard on the lower jaw, called the mandarin. The ears, legs, and ribs are similarly covered in long and feathery, silky hairs.

Whether it is styled in its natural state or given a more modern cut, there are many ways a groomer can give an Afghan Hound the look you want. Below are some ideas that might interest you.

The Classic Style or traditional look is the type shown in conformation shows. The hair is in its natural state, wherein the coat is not trimmed or clipped. The topknot is kept long and unadorned, while the hair in the ears, legs, and chest, is brushed to emphasize the flowing and elegant characteristic of the coat. The cuffs can be trimmed a bit in the front and back legs.

Braiding is a great way to keep the hair from blocking the face of an Afghan Hound. It could also prevent the breakage of hair shafts. French braiding involves dividing the hair into three parts from the crown of the head and overlaying it across a central part up to the nape of the neck.

The braids should not be set too tight that it causes itching of the skin nor too loose that the braids don’t hold.

With a wide variety of multi-colored decorative rubber bands available in the market, it is a good idea to simply tie up the long hair in the body in bunches. This would allow less dirt to be dragged by the hair while the dog is walking or moving about and would also prevent excessive matting. Using a grooming spray while putting on the bands will ease the tangling.

A medium-length cut is perfect for an Afghan Hound that has accumulated matting and tangles in its hair. It is an ideal cut to remove the knots while still retaining some length without it touching the floor. This way, a groomer can still add some body to the hair and style it close to a traditional look.

This style involves tying the top knot into two bunches hanging on both sides of the head. The pigtails can be kept long, short, or in braids. One has to simply part the hair on top of the head and make sure to comb it smoothly, such that there are no knots. Then tie one bunch with a band and repeat on the other side. You can add a colorful bow for a cute touch.

The bob cut involves cutting the head knot into short or medium-length hair. The hair is kept just above or a little below the jawline and not at shoulder length. Think Anna Wintour when doing this style with the hair rounded inwards at the bottom to give a fuller look. A good optional style is to add some bangs by cutting the front part of the hair straight across.

Simple braids, as opposed to the French braid, start at the nape of the neck instead of the crown. The hair should be clean and well-conditioned before starting the braid. A semi-wet hair may be easier to handle.

First, comb the hair straight. Then, bunch the portion of hair you wish to braid and divide it into three sections. Overlay the sections until you get the desired length. Finish it off by tying the end with a rubber band or clip.

A native American look can be achieved by different means. The hair can be simply kept in its natural flowing style, or it can be bunched into a ponytail or set into a braid. What sets it apart is the use of colorful ornaments, like a wide neck collar with beads or ponytail holders with beautiful native American designs or some other beadwork.

Since the Afghan Hound has long and silky hair all over, you can just place a simple ponytail anywhere you desire. Gather a bunch of hair you wish to tie and comb it smoothly to remove tangles. Set the latex hair band half an inch above the skin, and proceed to do another one. You can tie up the tips of adjacent ponytails with another latex band to give them a cleaner look.

The ponytail is the simplest hairstyle you can give an Afghan Hound. You do not need to go to a professional groomer to do the task, and you only need a latex hair band to tie it into place. This is a great solution to keep the hair out of their eyes and to open up their face. Be sure not to place the band too tightly so that it will cause itchiness or too loose that it will fall off.

Fancy or exotic cuts are styles wherein a groomer can show his or her creativity. The styles may not necessarily be traditional or accepted as standards set by dog associations, but because of the Afghan Hound’s human-like hair, some may find it tempting to create something out of the ordinary.

An example is cutting the hair like a Poodle with shaved legs and leaving some parts with “poofs.” Others may opt for a mohawk or dye their hair in different colors.

The bulb ponytail is an adorable variation of the basic ponytail. The top hair is firstly gathered and combed until smooth and tied into a ponytail with a latex band that is about half an inch from the scalp. Another band is then tied around two inches from the first band and given a slight push to create a bulb in the middle. Depending on the length of the hair, another band can be added.

This look calls to mind the hairstyle of Farrah Fawcett in the 1970s show Charlie’s Angels. It involves having feathered bangs and lots of layering on the body hair.

The bangs are first cut or layered to a shorter cut, while the rest of the head and ear hair are layered in different degrees. It is then given a feathered look by applying hairspray or gel. The rest of the body hair is kept long and can also be styled into sweeping looks.

The Modified Teddy Bear Cut aims to make the dog look like a stuffed animal. The cut emphasizes roundness around the face, so the top knot will be trimmed short at an even length, as well as, the rest of the body hair at around 4 to 5 inches in length. The hair around the legs and feet is also rounded and sculpted to achieve a teddy bear look.

This cut will give an Afghan Hound to appear to have an angular look in its hair due to the three distinct layers. First, the top knot and the ear hair are cut in a straight line up to the shoulder level. The body hair is then cut in a straight line as well that is 4 to 5 inches from the ground. Lastly, the leg hair is cut about an inch from the ground.

The side part styling gives the Afghan Hound a more dramatic look. This works well with female hounds, which gives them that feminine and sophisticated touch. It really doesn’t involve any cutting or trimming, but more on how you part their hair on the side.

By using a comb, part the head hair asymmetrically all the way back to the crown. Try to achieve a precise line to give it more elegance and impact.

A short haircut or a kennel cut is where the hair is kept at the same short length throughout the body. Length can be between 2 to 3 inches over the head, ears, body, and legs. This is easier to maintain and can be preferable for a busy owner.

For an Afghan Hound who has become well-matted due to lack of grooming, this cut may be ideal. However, it would take over a year for the hair to re-grow to its natural state.

Short bangs give the Afghan Hound an edgier look. Whether trimmed short or just long enough to be let down on the forehead, the cut brings out their faces and places more emphasis on the eyes.

The front portion of the head knot is given a straight cut across while the rest of the head and body hair is kept long. For a cuter and softer look, the bangs can be pushed off to the side instead of combing straight down.

This hairstyle is fairly easy to do and is similar to the simple ponytail. The top knot is simply bunched up and tied with an elastic band in an upright manner. This allows the hair to not get in the way of the face, especially when they are eating. Make sure that the hair is free from tangles when parting it up.

Sometimes straight hair can look just flat on certain days, and you may want to upgrade an Afghan Hound’s look by introducing some volume into the hair. Using some hair rollers can just do the trick. Start by washing their hair clean and letting it dry. Setting the hair with rollers when wet will cause tangling.

Section the hair and set the rollers just like you would in human hair. After 20 to 30 minutes, take the rollers out and style the hair with your hands. Avoid using iron curlers unless in the grooming salon since these are hot and can injure the dog.

To create the illusion that they are wearing bell-bottomed pants, the body hair should be trimmed from the top of the shoulders up to the rib area in such a way that it hangs close to the body and not hanging down to the floor. The leg hairs are kept long and trimmed around the bottom of the feet. To give volume to the leg hairs, brush them until they appear smooth.

Can You Cut An Afghan Hound’s Hair? Yes, you can cut and keep an Afghan Hound’s hair short. Some owners of the Afghan Hounds who keep them as house pets, instead of show pets for competitions, cut or trim their coats short for easier maintenance. It usually takes a year or two for the hair to grow back to its natural length.

How Do You Groom An Afghan Hound? There is not much trimming or cutting involved in grooming an Afghan Hound. Their hair is best kept naturally long, and the only maintenance needed is regular bathing and brushing to keep their coats clean and free of matting. They should be bathed first and towel dried before brushing them with a pin brush. It is much easier to untangle the hair when it is still a little bit moist and clean. You can use a de-tangling spray when brushing them in between baths to prevent matting. 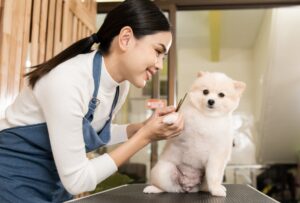