Why Do Dogs Dig? Insights To Understanding Why Dogs Love Digging Holes

Dogs are naturally curious creatures, and they like to explore the world around them. Dogs dig holes for many reasons. They can be trying to cool off, looking for something interesting to chew, or just having fun. They may also be trying to keep themselves busy when they are bored and alone at home.

Why Do Dogs Go Crazy After A Bath?

Yes, many dogs are not fond of getting a good scrub. Once it’s finished, there’s nothing in this world that can make them happier than running around and getting crazy. It’s like shouting for joy, except that our dogs do it differently, and running around like crazy is pretty normal for them.

Why Do Dogs Shake Their Bodies?

Dogs shake their bodies as a way to help them dry off. Shaking helps dogs get rid of the water on their fur in a matter of seconds. Dogs shaking after coming from the pool can do away with as much as 70% of the water in just four seconds.

Why Do Dogs Roll In Dead Things? Spoiler! They Did It For Survival

Dogs roll around in dead things because this is an instinctive behavior that has been handed down through many canine generations as a means of communicating with other dogs or simply to seek their owners’ attention.

Why Do Dogs Lay In The Sun? Understanding The Secret Behind Sunbathing

Dogs lay in the sun because it’s a good way to boost vitamin D levels in their system. Vitamin D is an essential nutrient that regulates both the calcium and phosphorus in their bodies.

Why Do Dogs Chase Cats?

Dogs chase after cats either because their natural prey drive has been triggered, as an aggressive response to stress triggers, an attempt to play with the cat, or due to the cat encroaching on the dog’s perceived territory.

Why Do Dogs Bury Their Food? Understanding This Instinctive Behavior

Most experts believe that dogs bury their food because it is a genetically inherited trait. Their wild ancestors would bury food to save it for later, and the trait has been passed down to domesticated dogs.

Can Dogs Control Their Tails? Insights To Understanding The Wagging Behavior

What still baffles many dog owners to date is whether or not dogs actually wag their tails on purpose or subconsciously. The best answer to whether dogs can control their tails is an absolute yes. However, tail wagging is not always a result of a conscious effort.

Why Do Dogs Twitch And Shake In Their Sleep? Here’s What They Are Dreaming About 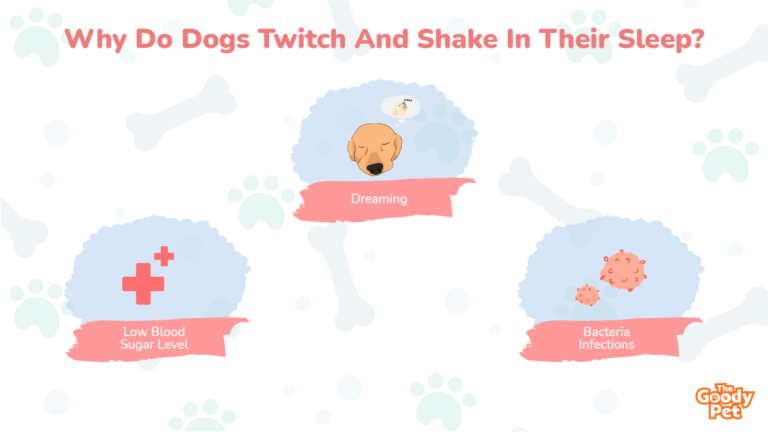 Dogs twitch and shake in their sleep mostly because they have dreams. Moreover, it is also possible for a dog’s sleep twitching to be due to seizures caused by an underlying medical condition that you may not be aware of.